Tringa melanoleuca
Charadriiformes
This is a large and highly varied group of birds that do not have many outward similarities. Most are water birds that feed on invertebrates or small aquatic creatures. The order is well represented in Washington, with seven families:
Scolopacidae
This large and diverse family of shorebirds is made up mostly of northern breeders that migrate long distances. Their highly migratory nature leads them astray fairly frequently, and rarities often show up outside their normal range. Many of these mostly coastal birds forage in relation to the tides, rather than the time of day. They use a variety of foraging techniques, but the most common techniques are picking food from the ground or water, or probing into wet sand or mud. Those that probe generally have sensitive bills that open at the tips. Most members of this group eat small invertebrates. Many make dramatic, aerial display-flights during courtship. Nesting practices vary, but both parents typically help raise the young. Clutch size is usually four, and both parents generally incubate. The young are precocial and leave the nest within a day of the hatching of the last chick. Most feed themselves, although the parents generally tend the young for a varying period of time. The female typically abandons the group first, leaving the male to care for the young until they are independent.
Common migrant. Winter uncommon west, rare east.
Source of Bird Audio

Greater Yellowlegs breed in muskeg bogs in the northern boreal forest. Their wintering and migration habitats are more general; they can be found in many fresh and saltwater wetland habitats, including open marshes, mudflats, estuaries, open beaches, lakeshores, and riverbanks. In comparison to Lesser Yellowlegs, Greaters are typically found in more open areas, on larger bodies of water, and on more extensive mudflats.

During the breeding season, insects and insect larvae are the primary sources of food. During winter and migration, small fish, crustaceans, snails, and other aquatic animals round out the diet.

Due to its low densities and remote nesting areas, the breeding biology of the Greater Yellowlegs is not well studied, and much is unknown about it. They are presumed to be monogamous, and pairs form shortly after they arrive on the breeding grounds. The nest is on the ground, close to the water. It is well concealed in a shallow depression, under a low shrub or next to a moss hummock. The nest is sparsely lined with grass, leaves, lichen, and twigs. Both parents probably help incubate the 4 eggs for 23 days. The young leave the nest soon after hatching and find their own food. The parents appear to tend the young at least until they are capable of fluttering flight, at 25 days, and may stay until they are strong flyers, at 35-40 days. Pairs raise a single brood a season.

A long-distance migrant, Greater Yellowlegs begin moving south from the breeding grounds in late June. During migration, they are found in appropriate habitat from coast to coast. While some stay in Washington through winter, most continue on to the southern US and Central and South America. In spring, they leave South America by March and start heading back to the breeding grounds.

Hunting led to population declines in the 19th Century, but protection in the form of the Migratory Bird Treaty Act of 1918 has helped the population recover. Christmas Bird Count data suggest that Greater Yellowlegs are becoming more common in Washington in winter. The Canadian Wildlife Service estimates the population to number 100,000 birds in North America. Throughout their range, Greater Yellowlegs are common and widespread, but their low density, remote breeding grounds, and lack of major stopover or wintering areas make the population difficult to survey. Fortunately, these traits also protect the population from many threats, and their flexibility in migration and wintering habitat will help the population in the face of increased wetland habitat destruction. Protection of this habitat remains important to maintain numbers of this and other shorebird species.

Greater Yellowlegs are common migrants throughout Washington's lowland wetlands. Greatest densities are seen from mid-March through mid-May, and again from late June through October. Some birds remain in Washington through winter, along the coast or in the Puget Trough, and occasionally east of the Cascades along the Columbia River. 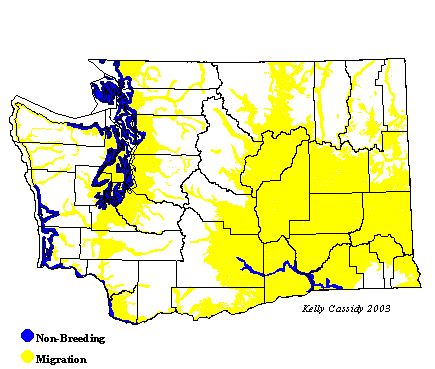