Carduelis flammea
Passeriformes
Members of this diverse group make up more than half of the bird species worldwide. Most are small. However their brains are relatively large and their learning abilities are greater than those of most other birds. Passerine birds are divided into two suborders, the suboscines and the oscines. Oscines are capable of more complex song, and are considered the true songbirds. In Washington, the tyrant flycatchers are the only suboscines; the remaining 27 families are oscines.
Fringillidae
The finch family is made up of acrobatic seedeaters with conical bills and notched tails. Many are nomadic, wandering in winter in search of abundant seeds. Most finch species flock outside the breeding season, and many form flocks during the breeding season as well. Many finches have undulating flight patterns, and may give calls while in flight. They tend to inhabit forest patches and shrubby edges. Most finch species are sexually dimorphic and monogamous, and although the females alone generally incubate the eggs, both sexes help tend the young. Unlike many seed-eating birds that feed protein-rich insects to their young, many finches feed their young mostly seeds.
Irregular winter visitor.

The Common Redpoll is slightly larger than the American Goldfinch. The male is heavily streaked and has a small, red crown and pink breast. The female is duller than the male and lacks the pink breast, but does have the same red 'poll' as the male.

Redpolls are Arctic and sub-Arctic breeders, and Common Redpolls typically breed in open coniferous forests and shrubby birch and alder thickets. During winter they inhabit various kinds of semi-open country, including woodland edges and brushy or weedy fields. They can often be found in birch, alder, or willow patches.

Busy and acrobatic, Common Redpolls forage in flocks along hedgerows or in catkin-bearing trees. They are well adapted to feeding at the very tips of small branches, hanging upside-down, and using their feet to hold food items. They also forage on the ground, especially in winter, and move in rolling waves across ground-feeding areas. They have pouches in their throats that allow them to gather large amounts of food quickly, and then retreat to a safe place to process the food. In winter, they will drop from a tree into deep snow and make a tunnel about a foot long to a roosting chamber. Like many finches, they have an undulating flight pattern. They are quite vocal, making constant contact calls within their flocks, and are often located by their flight calls.

Common Redpolls eat tiny seeds, especially those from willow, birch, and alder trees. They also eat buds, weeds, grasses, and insects. They feed insects and spiders to their young.

Common Redpolls form monogamous pairs. Nests may be placed close together and are well hidden in dense, low shrubs, in clumps of grass, or under brush piles. The female builds an open cup nest of loosely arranged twigs, grass, and moss, lined with ptarmigan feathers, plant down, and hair. The female incubates 4 to 6 eggs for about 11 days. The male brings food to the female while she incubates and while she broods the young. About five days after the young hatch, the female begins to bring food to the nest. She continues to do most of the actual feeding. The young leave the nest 11 to 12 days after hatching. At this point, they can fly weakly and follow the parents around. They are fully independent at about 26 days of age.

Common Redpolls breed in the sub-Arctic. If enough food is available, many birds will remain on the breeding grounds in winter, but many birds move south. The winter range is variable, based on food supply, but generally encompasses the northern tier of the United States.

While there is no reliable information on population trends, Common Redpolls breed in regions and habitats that are not generally subject to habitat degradation. Their wintering range is extensive, and they are flexible, quickly moving on to new areas if others are unsuitable.

Winter visitors, Common Redpolls vary in abundance and location from year to year. They are most regular in the northern portion of the state and in far eastern Washington, where they are generally present every winter. They are rare in western Washington. They are often found with flocks of Pine Siskins and American Goldfinches. 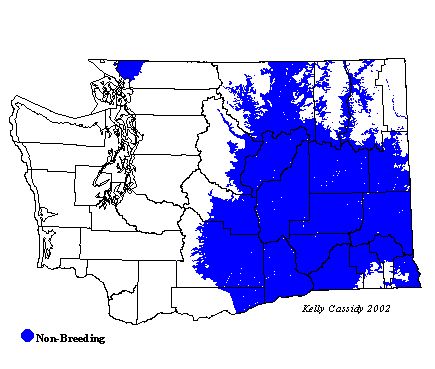