Contopus cooperi
Passeriformes
Members of this diverse group make up more than half of the bird species worldwide. Most are small. However their brains are relatively large and their learning abilities are greater than those of most other birds. Passerine birds are divided into two suborders, the suboscines and the oscines. Oscines are capable of more complex song, and are considered the true songbirds. In Washington, the tyrant flycatchers are the only suboscines; the remaining 27 families are oscines.
Tyrannidae
Unlike most passerines found in North America, flycatchers are suboscines. Suboscines have a simpler syrinx (voice box) than the oscines (songbirds), and hence have less-developed and less-elaborate songs. Their song is innate, and does not contain a learned component. The flycatchers are the only suboscine passerines found in North America north of Mexico. Nearly all suboscines (and all Tyrannidae) are native to the New World, and they are much more numerous in the tropics, where several other families occur in addition to the Tyrannidae. Flycatchers are named for their foraging style. They sit quietly on a perch and dart out to grab a flying insect from the air, and then return to their perch to wait for the next meal to fly by. Many also forage by hovering next to foliage or over the ground. Most have a distinct, upright posture and a slight crest. They have small feet as they do not typically walk or run on the ground. Most flycatchers are monogamous. The female generally builds the nest, incubates the eggs, and broods the young, although both parents feed the young. Flycatchers of the genus Empidonax pose many identification challenges for birders. Range, habitat, vocalizations, and behavior must all be taken into account to distinguish between members of this group.
Fairly common summer resident.
Source of Bird Audio

The Olive-sided Flycatcher has dark sides bordering a white hourglass on its breast; markings that make the bird look as if it is wearing a vest. It is a bulky flycatcher, with a relatively short tail and large head.

This forest flycatcher historically used recently burned areas, but now that most fires are suppressed, it often takes advantage of areas that have been logged, as well as other clearings and edges, which are superficially similar to post-fire stands.

The Olive-sided Flycatcher sits high in a treetop, darting out after a flying insect, then returns to its perch. It vocalizes frequently, and is readily identified by its distinctive "quick-THREE-beers" or "pip-pip-pip" call.

Large flying insects, especially bees, are the preferred diet of the Olive-sided Flycatcher.

The male defends his nesting territory and attracts a mate by singing from a prominent perch. Both members of the monogamous pair aggressively defend the nest, which is an open cup of twigs, weeds, and grass, with a fine lining. The nest is usually at varying heights in a conifer, on a horizontal branch well away from the trunk, hidden amidst dense twigs or needles. The female builds the nest and incubates the 3 to 4 eggs for 14 to 16 days. Both parents feed the young, which fledge at 19 to 21 days. The young continue to depend on the adults for about a week after leaving the nest, and family groups may stay together until fall migration.

Olive-sided Flycatchers undertake one of the longest and most drawn out migrations of Washington's birds. High-elevation nesters usually move downslope after the breeding season. All of Washington's breeders generally leave in August for wintering grounds from Panama south to the Andes. They begin returning to Washington during the last days of April and continue arriving until June.

The Breeding Bird Survey and other studies have detected significant declines throughout the range of this species in recent decades. This decline is especially evident in the areas of greatest abundance, including the Cascade Mountains. Olive-sided Flycatchers are listed by the US Fish and Wildlife Service as a species-of-concern, and are included on the Audubon~Washington watch list. The cause of the decline is unknown, but scientists speculate that it may be due to habitat loss on the wintering grounds, or a decrease in suitability of habitat on the breeding grounds. Logged areas and other clearings appear similar to post-fire clearings, and Olive-sided Flycatchers certainly use those areas. Unfortunately, studies on rates of productivity have shown that they fledge fewer young from these areas, which may account for some of the decline as well. The most significant decrease has occurred in eastern North America

Olive-sided Flycatchers are common in most forest openings throughout the state from mid-May to mid-August. They are less common in the far southeastern corner of the state and sometimes can also be found in city parks or suburban areas, especially during migration. 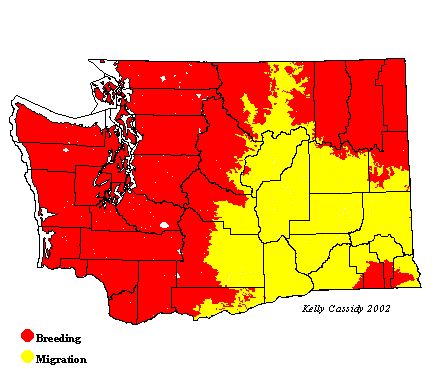