Picoides dorsalis
Piciformes
Most birds in this group are adapted for climbing and perching in trees and range widely in size. The feet of most species have two toes pointing forward and two pointing back, a special adaptation for trunk-climbing known as a zygodactyl arrangement. The order includes families as diverse as the puffbirds and the toucans, but only the woodpecker family is found in Washington:
Picidae
Woodpeckers have many adaptations that allow them to perch upright against tree trunks and feed on insects under the bark or within the wood of the tree itself. Further specialization has produced many aberrant forms with different behavior and feeding habits. Most use their strong claws and stiff tail feathers to brace themselves against tree trunks as they climb. The specially adapted skulls of woodpeckers allow them to pound hard on tree trunks to excavate nesting and roosting cavities, to find food, and to communicate and attract mates. A special arrangement of bones and elastic tissues allows woodpeckers to extend their long tongues and extract insect prey from the holes they chisel with their strong, sharp beaks. The principal food of most woodpeckers is insects, especially the larvae of wood-boring beetles. A few woodpeckers feed on ants, nuts, or flying insects. Many also take a small amount of fruit. Most woodpeckers have rounded wings and an undulating flight pattern. The plumage of most is some combination of black and white, though brown is not uncommon. Many, especially males, have small patches of red or yellow on their heads. Although they may appear to damage trees, woodpeckers are generally good for tree health because they feed so heavily on wood-boring beetles. Most woodpecker species are monogamous, and many form long-term pair bonds. The nests are usually lined with nothing but the woodchips created by excavating the nest cavity, which is excavated by both members of the pair. Both sexes incubate the eggs, with males generally taking the night shift. Both sexes also feed and tend the young.
Uncommon resident, mostly east.
Source of Bird Audio

American Three-toed Woodpeckers have black and white barred backs, black wings, white breasts, black and white barred flanks, black tails with white outer tail feathers, and black heads with white moustchial and (usually) post-ocular stripes. Males have yellow crown-patches. As their name asserts, they have three rather than four toes on each foot. They can be distinguished from Black-backed Woodpeckers by the barring on their backs and by their slightly smaller size. Their foreheads are also speckled with white rather than being all black like those of Black-backed Woodpeckers, and their white moustachial stripes and yellow crown-patches are less clearly defined.

American Three-toed Woodpeckers breed in mature or old-growth boreal conifer forests, especially spruce, larch, fir, and pine. In North America they breed farther north than any other woodpecker, and in Washington they can be found at elevations from about 4,000 feet up to the tree line. They will come down lower to burned and flooded areas with standing dead trees and to other areas undergoing heavy infestations of wood-boring beetles. Their range and habitat overlap with those of Black-backed Woodpeckers, but they generally prefer denser forests.

American Three-toed Woodpeckers are not wary of humans, but they are also quiet and inconspicuous and can be difficult to see. They often perch against tree trunks, and are usually solitary, although pairs may forage together. They tend to forage higher on the trunk than Black-backed Woodpeckers, but like Black-backed Woodpeckers, they scale the bark off dead and dying trees while foraging, a behavior that often reveals their presence in an area.

Bark beetle larvae, especially spruce bark beetles, are the most common prey of the American Three-toed Woodpecker. They also eat other insects and some fruit, and they visit sapsucker wells to feed on the sap.

American Three-toed Woodpeckers form monogamous pairs and may stay together for more than one season. Both members of the pair excavate a new nest cavity in a dead tree or branch every year. The nest is lined with woodchips from the excavation, but the woodpeckers do not add any other lining. Both sexes typically incubate the 4 eggs for 12 to 14 days and brood the young continuously for the first 4 days after they hatch. Both feed the young, which leave the nest after 22 to 26 days. The parents may divide the brood, each taking half tend for another 4 to 8 weeks. Typically they raise only a single brood each year.

Although resident in many areas, with no regular latitudinal migration, American Three-toed Woodpeckers are somewhat nomadic and may move into areas after fires or insect outbreaks, although they are less responsive to fires than Black-backed Woodpeckers. There is also some evidence of winter withdrawal into the lowlands.

American Three-toed Woodpeckers are uncommon and local. Their inconspicuous nature, relatively small numbers, and irruptive behavior make it difficult to monitor the population. The quantity and distribution of mature and old-growth forests probably limit their numbers, and data suggest that North American populations are declining, probably because of fire suppression and logging practices that do not leave the diseased and dying timber that hosts their main food source. 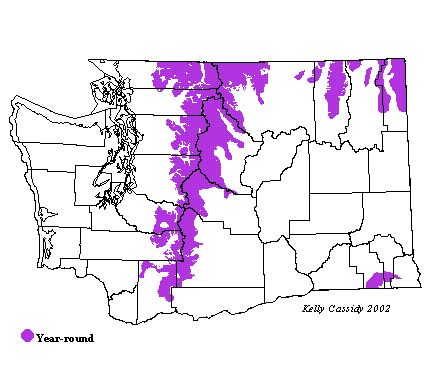