Charadrius semipalmatus
Charadriiformes
This is a large and highly varied group of birds that do not have many outward similarities. Most are water birds that feed on invertebrates or small aquatic creatures. The order is well represented in Washington, with seven families:
Charadriidae
Plovers are small to medium-sized shorebirds with round heads, short bills, large eyes, and short necks. They live on the ground in open habitats, mostly near water. They build a simple scrape nest on the ground, in which they lay 3–4 eggs. Both parents incubate and care for the young, although newly hatched chicks walk and feed themselves soon after hatching. Plovers eat small invertebrates, and their foraging style is what sets them apart from other shorebirds. Plovers are visual feeders: while foraging, they run, pause, eat, run, and pause repeatedly. This upright style contrasts with that of sandpipers, which are most often seen head down, probing for underground prey. Plovers also typically do not nest as far to the north as most sandpipers and do not migrate as far.
Fairly common migrant. Rare winter west. Uncommon migrant east.
Source of Bird Audio

The Semipalmated Plover is a small plover with a short bill and yellow-orange legs. It has brown upperparts with white below and a single, dark breast band. The breast band, sides of head, and forecrown are black in breeding adults, and brown in non-breeding adults and juveniles.

During migration and in winter, Semipalmated Plovers inhabit coastal mudflats and exposed sandy beaches. They also migrate through the interior in small numbers, spending time on lakeshores, alkaline ponds, and shores of sloughs and flooded fields. They breed throughout the North American Arctic and subarctic, often on gravel bars along rivers and ponds. They tend to avoid marsh vegetation.

Semipalmated Plovers walk or run with their heads up, pausing to look for prey. They commonly 'foot-stir," holding one foot forward and vibrating the substrate to cause invertebrates to move and be detected. They typically run if disturbed, but they are also fast, powerful fliers. Semipalmated Plovers roost and fly in flocks, but forage singly. They are territorial around nesting and feeding areas.

On the coast, the plovers' diet consists of marine worms, crustaceans, and small mollusks. On breeding grounds and during migration inland, Semipalmated Plovers eat mostly insects.

The male Semipalmated Plover arrives on the breeding grounds before the female and establishes a nesting territory. He performs a 'butterfly flight' during courtship. The male constructs a scrape nest in sand or gravel and lines it with material found near the nest. The female usually lays four eggs, and male and female spend nearly equal time incubating. Chicks can walk and feed themselves within hours of hatching, but are brooded for several days. Both sexes tend the young, but females may leave approximately 15 days after hatching. Semipalmated Plovers have one brood per season.

Semipalmated Plovers migrate through Washington from mid-April to mid-May, and from July through September. Small numbers regularly winter on the outer coast north to southern British Columbia. Breeding is rare in Washington, but it has occurred at Damon Point. Non-breeding birds occasionally summer on the coast. Semipalmated Plovers are uncommon migrants in the interior part of the state.

Semipalmated Plovers are abundant on the outer coast and its estuaries, and less so around Puget Sound, during peak migration at the end of April and the end of July. Leadbetter Point has the largest counts of summer non-breeders. 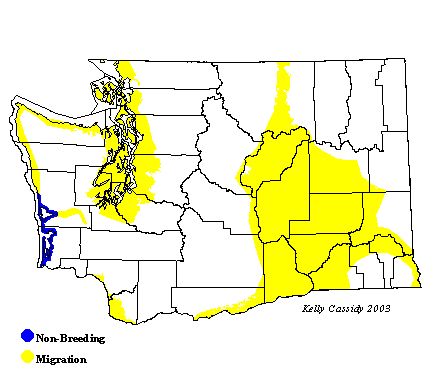